After completing the first fully-functional battery module in June 2019, we could finally run different test scenarios to evaluate our preliminary design. After some additional modifications of our test module and extensive preparations for a proper testbed integration and data logging, we were provided a 100 A battery pack tester along with a climate chamber at the Institute for Power Electronics and Electrical Drives (ISEA). Our battery pack is equipped with an integrated PCM-cooling and a battery management system based on the open-source foxbms, which communicates through a CAN-interface and is connected to our control software. The BMS records voltage, current and temperature data in a frequency of 10 Hz. 12 voltage sensing lines are connected to the 12 serial connected cell blocks of 5 parallel cells each. We constantly measure 6 pack temperatures that cover corner cells, edge cells and cells located in the middle at both cell side (through the PCM) and negative pole. Additionally, the ambient temperature is tracked. For a precise current measurement, we extended our test battery with an IVT-S shunt-based current sensor that was sponsored by Isabellenhütte. It further tracks battery contactors and fuse voltages that are considered in additional safety checkups. More information of the battery pack construction can be found in our previous post. In this post, we want to present and discuss our test results. 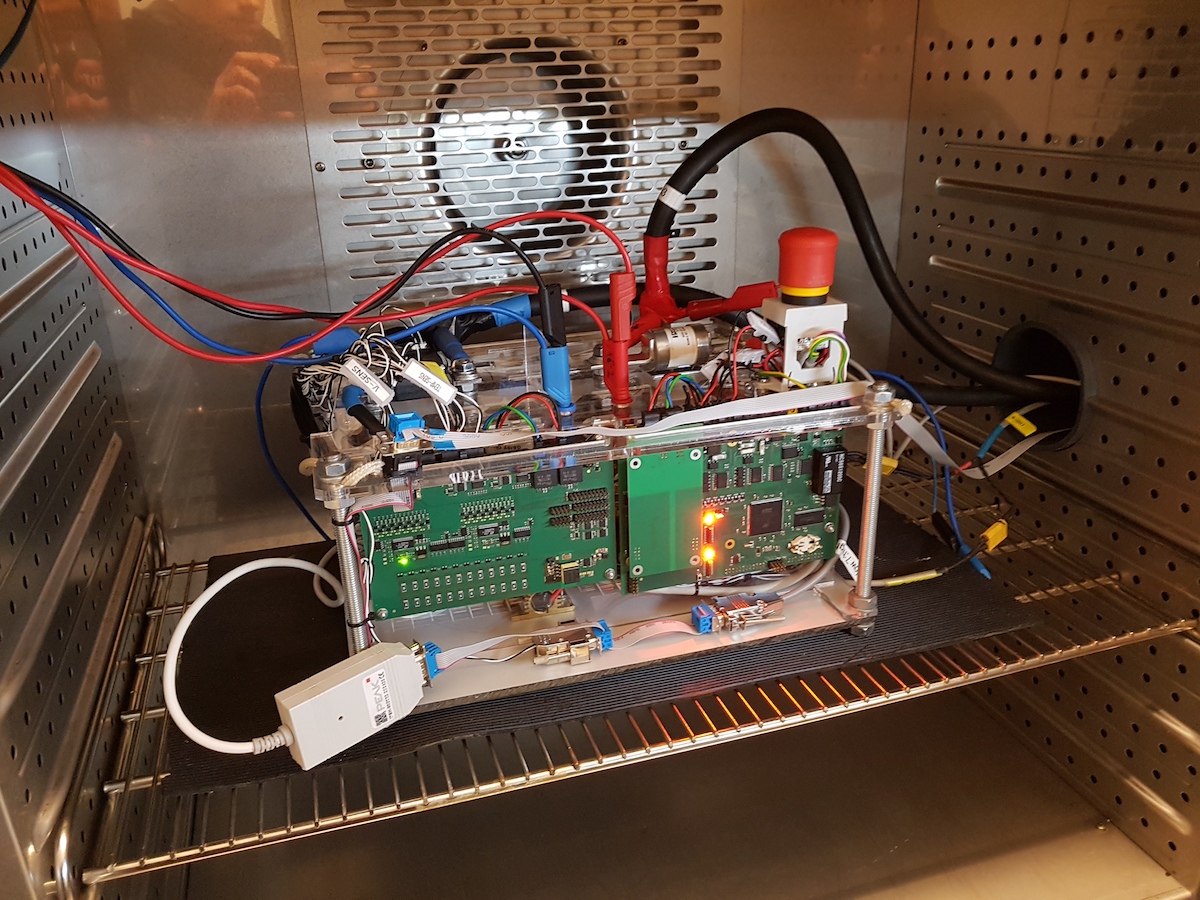 Four scenarios were tested where the first three comprise tests of the full module and the forth is considering the emergency case with a single cell being tested. For all scenarios, climate chamber and battery were pre-conditioned to an initial temperature of 16 °C while the climate control remained deactivated during the test runs in order to avoid active cooling.

The fully-electric profile could be accomplished without any problems. In accordance with previous simulations, the maximum module current remained closely below 100 A. Shortly after the end of the climb phase, the maximum temperature of 56.3°C was measured at the cell/PCM surface in mid and edge regions where there is least convection to the surrounding environment. A temperature gradient of up to 10°C became visible and should be mitigated in the final pack design. The remaining energy was sufficient for a 18.3 min cruise flight under full-load conditions. 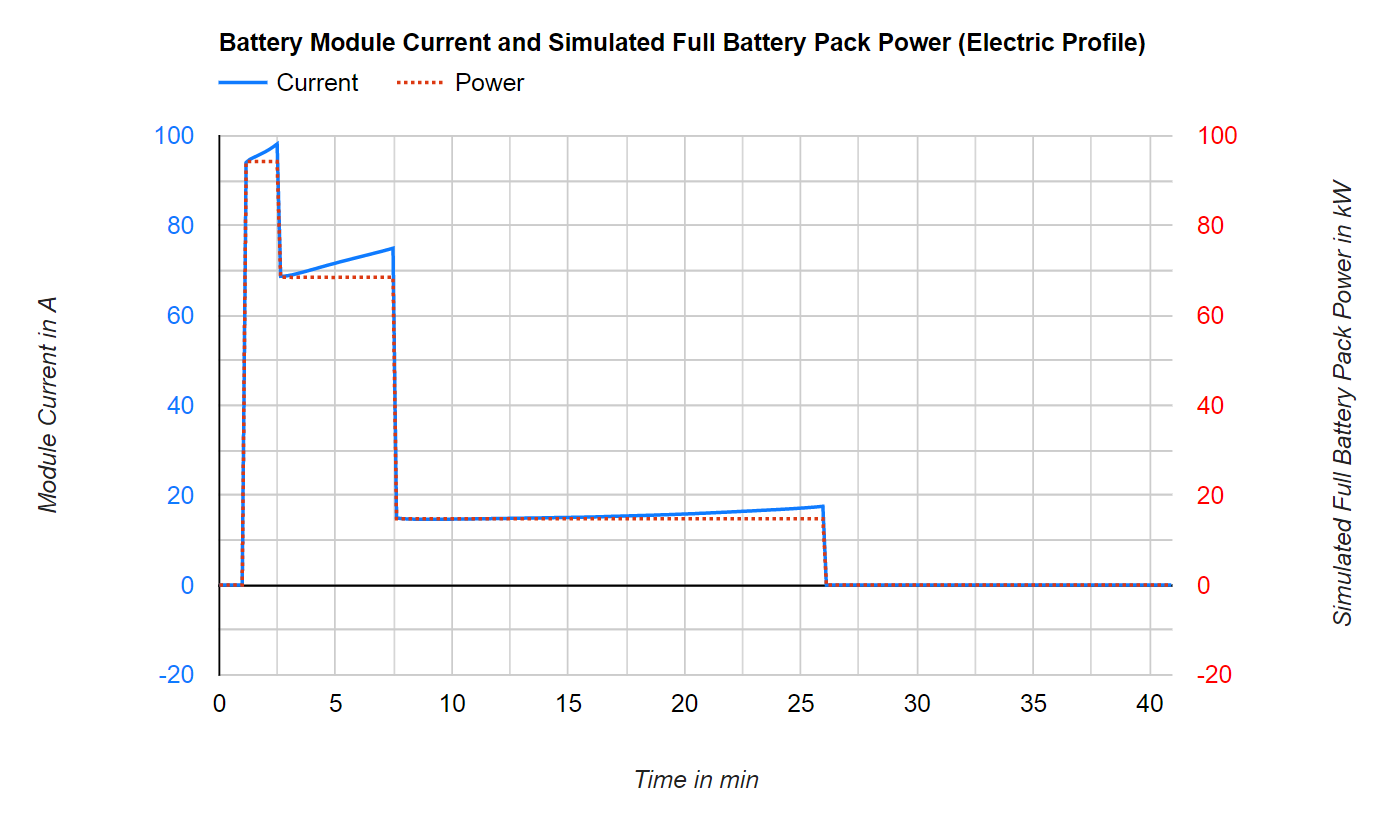 2. Reduced electric profile – electric profile with reduced climbing rate. Climbing was aborted at a measured maximum temperature of 58 °C after which a cruise flight is performed until a minimum cell voltage 2.9 V is reached.

In this test run, a more efficient climb rate of 2.4 m/s (before 3.4 m/s) was simulated by respectively decreasing power demands. The climb phase cutoff criterion (temperature > 58°C) was reached after 10.3 min, resulting in an achievable height of 1488 m. The remaining energy was sufficient for another 6.5 min cruise flight under full-load conditions. 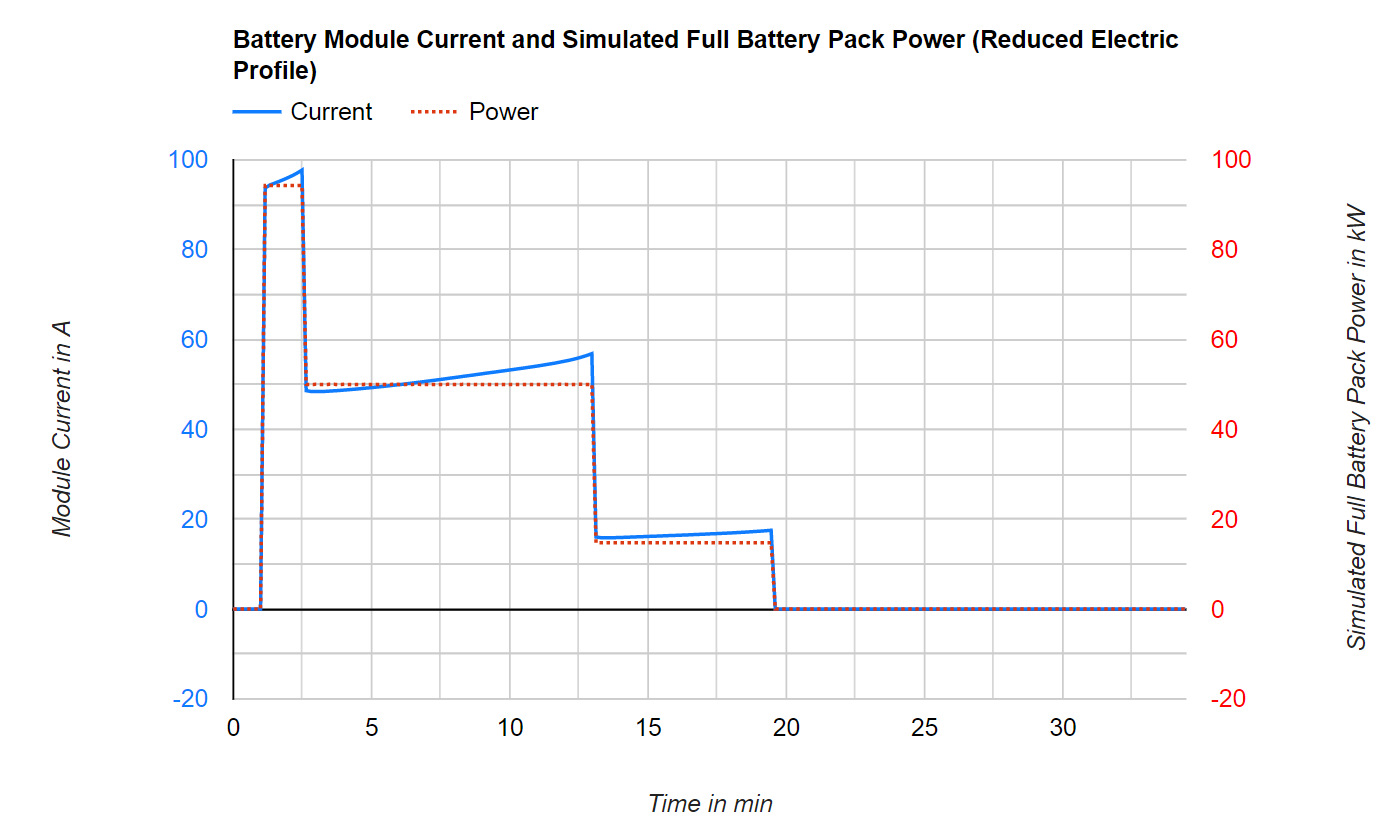 In the intended hybrid-electric flight operation, cruise power demand is solely covered by the range extender while the battery serves as take-off boost and load buffer. Therefore, this test run was designed to determine the maximum achievable height with REX-assisted climbing at 3.4 m/s climb rate. The 25 kW REX contribution led to a considerable decrease of battery current and temperature rise, resulting in a measured maximum temperature of 55.4°C at which the lower cell voltage limit was reached. The climb phase lasted for 14.7 min, resulting in an achievable altitude of about 2992 m, close to our altitude limit. 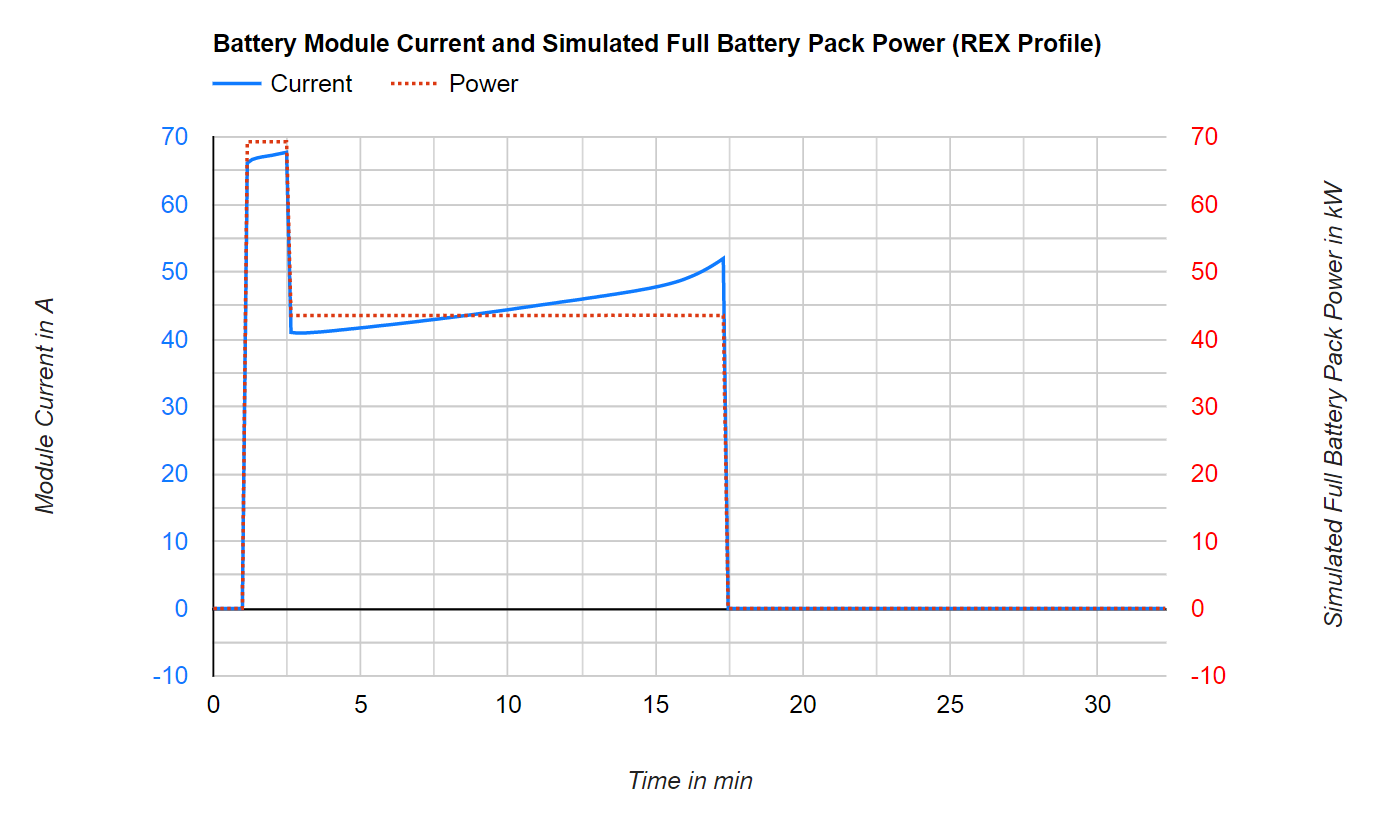 4. Emergency profile – worst-case scenario simulating a battery pack failure during start tested on one cell. The redundant (parallel) battery pack must provide power for both engines and allow for a safe return. Start phase is shortened to the actual demand of 35 s and climb phase designed for reaching a safe flight altitude. Cutoff criteria are extended to 80 °C / 2.6 V.

While the intended fully-electric profile reaches a maximum current of 19.6 A (= 6.5C) on cell-level, peak current demands are more than doubled in case of a battery pack outage in the critical starting phase. Hence, cells are temporarily operated beyond their specified maximum discharge current of 30 A which has, however, not led to safety-critical conditions. A safe flight altitude of 500 m could be reached within less than 200 s and a temperature increase from 17.8°C to 63.8°C, hardly exceeding the temperature warning limit of 60°C. The remaining energy is sufficient for a 12.7 min cruise flight under full-load conditions before landing, which is certainly enough for a safe return to the airport. 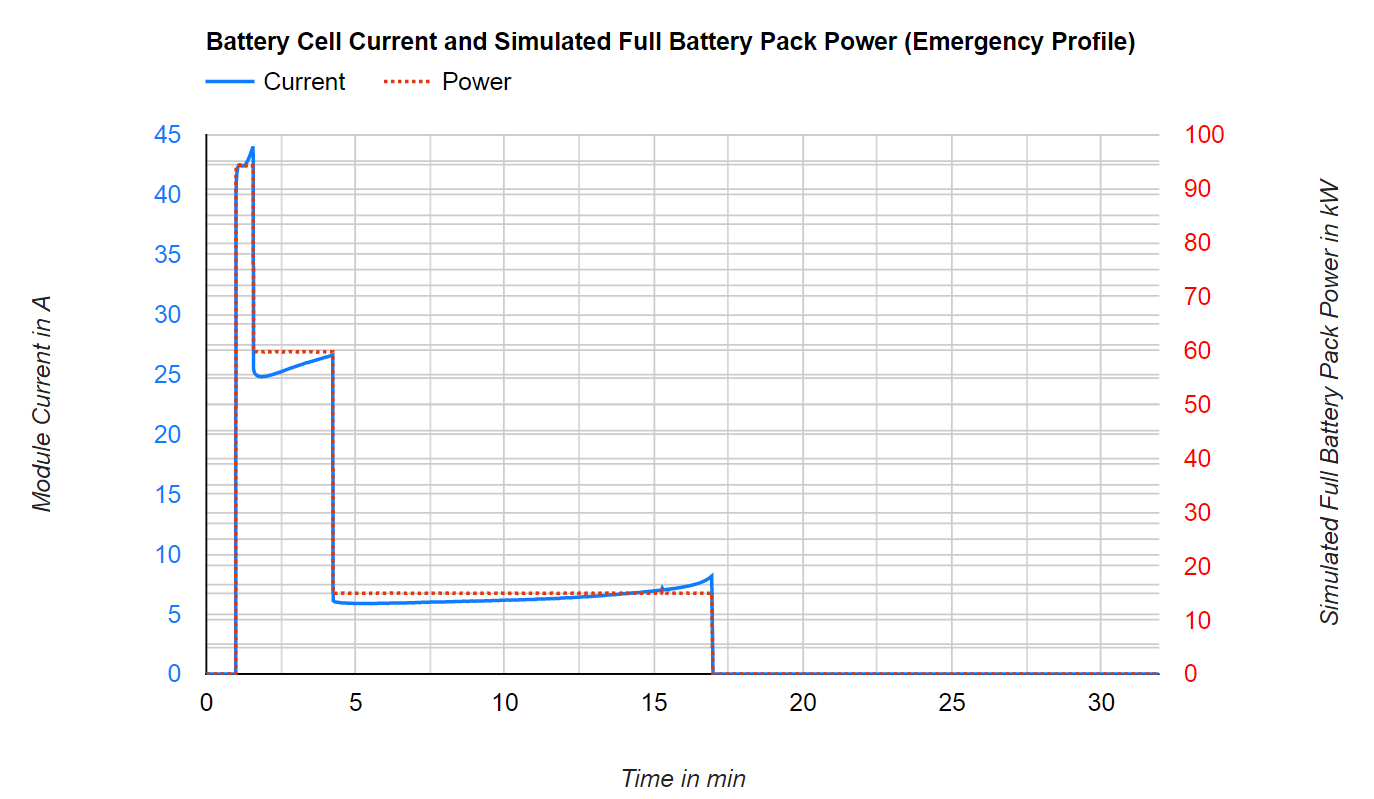